Home/Blog/Twin S.E.R.F. Installed To High Rise In Battersea
Previous Next

Our client e-mailed us saying that he had just moved into a new build apartment which was South facing and was looking for something to help with the unbearable heat.  It had been so warm, that he hadn’t even turned on the heating! Not wanting to mess up the view by putting up blinds, decided to look at using window film. They wanted a clear film that was neutral and non-reflective so asked Able Install to suggest which film they should use and why, as well as send them some samples and a quotation. We originally sent three samples of our recommended film. Where possible we will arrange a free site visit to make sure that the client receives the best advise and that we install the best possible window film for the purpose.

So when we did the site visit we found that the following film suited the client the best. 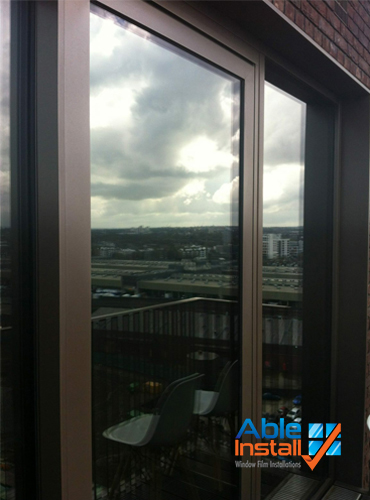 Craig & Diane found that the heat has been reduced by at least 10 degrees, no blinds required, meaning they maintain their view.

“We would highly recommend Able Install, having found their professionalism and service outstanding and the product top quality. From initial enquire through to fitting, Rob and his team were extremely helpful. The film has made a huge difference in heat and glare reduction and we’re very impressed overall.”