Anti-graffiti window film acts as a sacrificial barrier to protect glass from scratching and general abuse; that can easily be removed and replaced without the need to replace the more expensive glass itself.

These films are currently being fitted extensively to most of Transport for London (TFL) public service vehicles.

Another benefit of this type of safety and security window film protection is that it will prevent ‘Smash & Grab’ robberies! 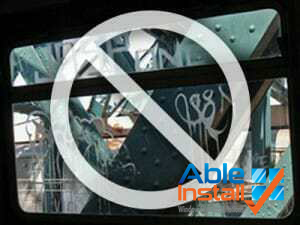 WHAT DO ANTI-GRAFFITI WINDOW FILMS DO?

Have You Considered Leading Anti-graffiti Window Film Before?

Do you own a business or a home in a big town? Maybe you have fallen victim to people spray painting and drawing graffiti on your expensive windows. Not only can it take a very long time to scrub off all of the graffiti, but in some cases scrubbing it off simply isn’t an option. 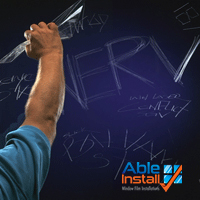 You can spend hours on one piece of the graffiti with no change whatsoever. So what should I do? Do I really have to replace the windows that have now been ruined? Replacing them every time they get damaged is going to mean huge expenses for you.

That’s where Able Install comes in! Thanks to our anti-graffiti window film, you no longer have to worry about having to spend hours scrubbing or replacing your graffitied windows. Our anti-graffiti film for windows acts like a transparent cover for your panes, which, if professionally installed, will not even be noticeable.

Should you find that your windows have acted as a canvas for some street artist or other, then all you need to do is have the film taken off and replaced with your new, clean, anti-graffiti window film.

Anti-graffiti film installation shouldn’t just act as protectors to your windows from graffiti itself. In fact, having anti-graffiti film for windows installed is also a great way of deterring from other types of damage such as scratches and even windows shattering.

The film will be able to hold the shattered window in place, keeping anyone from being hurt by it and possibly even deterring someone who is trying to break in through the window!

Get a Quote Now

Why Should I Hire Able Install to Set Up My Anti-Graffiti Window Film?

Being a business of our own, we know the importance of security in our offices. We also know that it is vital for our business to maintain a professional and clean look as much on the outside as it is on the inside.

Graffiti on the outside of any building automatically gives it an unclean, unpolished looks that no one wants for their business. When it comes to getting rid of it though, it can be a tricky job! So why not trust your leading and trusted local company with protecting your windows and in turn, your business, by installing our ever reliable anti-graffiti window films?

If you need help in Swansea, Ipswich, Hampshire, Wallington or elsewhere – call us.

To get your free quote today, simply email us at info@ableinstall.co.uk or give us a call on 0333 212 4236 and let’s help keep your business clean and professional!